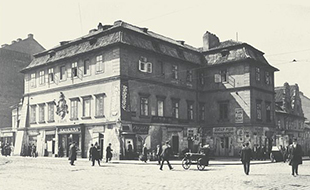 (Modern building) This corner straddling Resslova Street and Charles Square has always been a very lucrative location. And that was long before there was any metro or tram line here. Since the Middle Ages, Charles Square has been one of the busiest points in Prague, the city of a hundred spires. And it was during the Middle Ages that the history of this little corner was first written.

Three houses were first built on this property during the medieval period. One of them was already famous during the reign of Charles IV because a certain Henslinus taught foreign dancing there, and so the building acquired the name Dancing House (not the same Dancing House located two blocks lower). In 1666 the houses gave way to a Renaissance building with a massive gable up to Resslova Street, which survived all the way to the end of the building itself. A brewery was also founded here during that period. In the 18th century it was reconstructed and modified into a Baroque building after it was purchased by the Šálk family in 1781. From that time on, it got the name of U Šálků (At the Šálks). Sometimes we can still hear it referred to as “Dům U Pěti zvonečků” (The House of the Five Bells), which was the original name of the building. That’s what Karolína Světlá calls it in her book Zvonečková královna (The Bell Queen).

A pub and brewery garden facing south (toward Nuslí) was founded here later on. It included a statue of St. John of Nepomuk in an alcove of the wall separating the garden from the square. People would gather around it to pray during the evening before Midsummer’s Night. Later, several shops were opened up on the ground floor of the building, followed by the café V rubáši (In the Shroud), nicknamed Šmudlinka (Little Slattern), in the corner itself. The aforementioned Dancing House had stood on this very spot.

As the city continued to grow, so did the importance of Resslova Street and Charles Square as traffic thoroughfares. At the start of the 20th century, Resslova Street needed to be enlarged in order to ensure the smooth passage of traffic through the city. It was therefore decided to tear down U Šálků. A wave of indignation rose up against this move, mostly due to the popularity of the café and pub among both students and pensioners. Given the serious reasons behind the decision, not even an appeal to the president of the country could help. In 1938 demolition work began on the house and gardens. The statue of the saint was saved and remounted. Today it stands on the south side of the Church of Saint John the Baptist in Lesser Town.

With the onset of World War II, all plans for developing the area came to a halt. For various reasons, no use was made of it during the communist era despite the endless debate about it. In retrospect, we can consider this inaction fortunate, because a building in the middle of the square corresponding to the style of that time would have been an eyesore and destroyed the visual impression of the entire square. The first real activity surrounding this location occurred in 1980 with the building of metro line B. The plot was used as a central point for the construction of the whole line and later on as the site for a metro station. A makeshift marketplace was later set up there.

The lucrative location drew many investors in the wake of the revolution. After careful consideration, the best offer with the most useful concept for the entire city was chosen from among the several candidates. The idea was to preserve the traditions of an area where the people of Prague met to go shopping, have good coffee and dessert or enjoy an early evening beer on the way home. In 2001, after nearly 60 years as a vacant lot, the cornerstone of Charles Square Center was laid on the famous corner plot. The building, whose light, frame construction consists mainly of aluminum and glass, was completed in 2002. The three-level foundation of the building was constructed in the huge underground space once used for brewery cellars. A nine story building was constructed on top of it and became the new dominant feature of the square. Within a year, a commercial and administrative center, which this location needed, was established.

Wi-fi connection free in the Atrium